New immunomodulatory therapies for malignancies such as melanoma have transformed their management with significantly enhanced survival outcomes1. Antibodies against CTLA-4 (ipilimumab) and the programmed death-1 (PD-1) molecule increase the cytotoxic function of T-cells with excellent tumour response rates1,2  However, these therapies may also result in immune-related adverse effects. We describe 4 patients who developed thyroiditis due to CTLA-4 and PD-1 blockade.

Patient 1 had a background of metastatic melanoma and received ipilimumab. Following 3 cycles of ipilimumab, he developed hyperthyroidism which progressed to hypothyroidism 4 weeks later (table 1). Findings on ultrasound were consistent with thyroiditis. Thyroid antibodies were present and levothyroxine replacement was also required.

Three patients received anti-PD-1 therapy with pembrolizumab (formerly MK3475) as part of the KEYNOTE-001 study, 2 of whom had metastatic melanoma and 1 non-small cell lung cancer. Two patients presented with hypothyroidism 9 – 12 months after commencing pembrolizumab (table 1), preceded by subclinical hyperthyroidism 4 months prior to presentation. The third patient received pembrolizumab at a dose of 10mg/kg and presented with hyperthyroidism after 1 cycle, progressing to hypothyroidism after 4 weeks. In all 3 patients, thyroid antibodies were not detected, but ultrasound findings were consistent with thyroiditis. One patient had a thyroid nodule and underwent fine needle aspiration. Cytology demonstrated benign follicular cells with several multinucleated giant cells. Two patients remain on levothyroxine replacement.

Thyroiditis is a known side effect of both CTLA-4 and PD-1 blockade. CTLA-4 gene polymorphisms are associated with autoimmune thyroid diseases3. The exact mechanisms of anti-PD-1 induced thyroiditis remain unclear, but may be due to a switching of the immune system to an effector T-cell response, resulting in macrophage activation by interferon gamma, and cell-mediated thyroid damage4. Monitoring of thyroid function tests are required with use of these therapies. 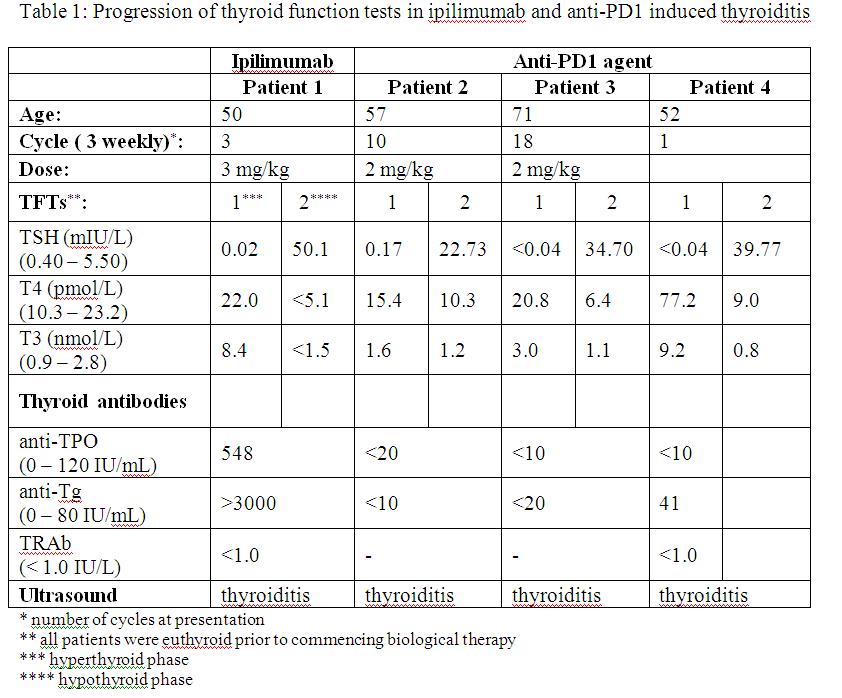