Introduction: Parathyroid hormone (PTH) is commonly measured in the setting of chronic renal failure, investigation and management of hyperparathyroidism and osteoporosis. It is also routinely requested in ‘general health’ checks, particularly given the recent interest in calcium and vitamin D.

Background: On the 17th February 2014 Abbott Diagnostic issued an immediate discontinuation of its Architect intact PTH assay (27/148 Australian laboratories used this assay), stating a magnitude shift of 13-45% in patient results when using current reagent and calibrator lots in comparison to an earlier study in August 2012.

Data: In-house retrospective data revealed a transient spike in mean PTH results in early 2010 and a significant rise in monthly median PTH from mid 2013. Mean and median PTH levels for the second half of 2013 were above the upper limit of the reference interval (mean 7.7 pmol/L, median 9.2 pmol/L, reference interval 0.7-7.0 pmol/L ). Samples tested on both the Abbott and Roche assays showed a significant positive proportional bias towards the Abbott results,  however the reference intervals on these assays are very similar. 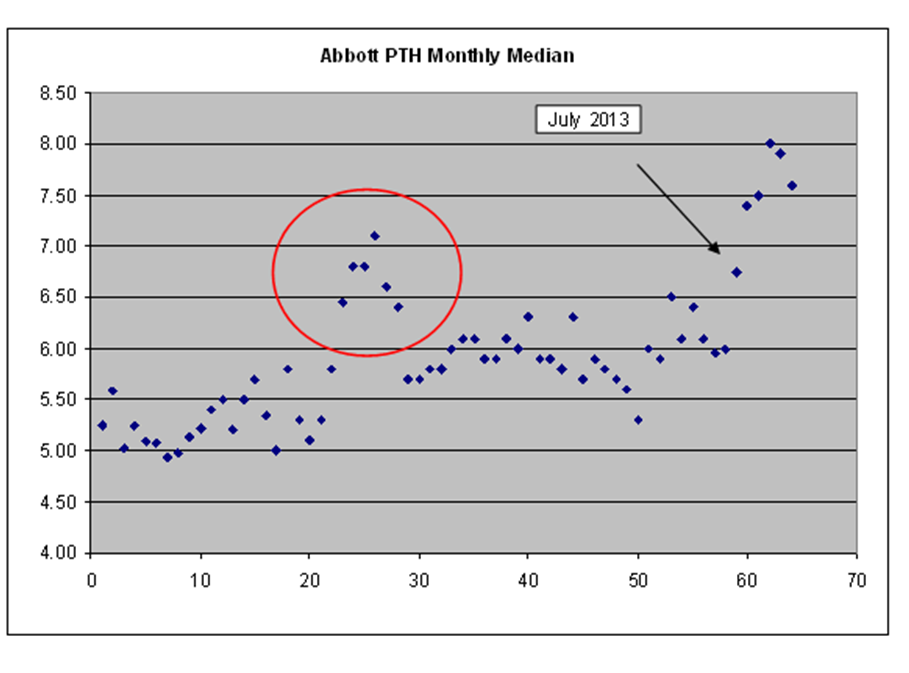 Discussion: Subsequent to the discontinuation of the assay, PTH was briefly unavailable for analysis. Every PTH request was then individually reviewed. Samples requiring analysis were sent to a different laboratory. In the ten days following the assay withdrawal, only 68/322 samples (21.1%) were sent for analysis. The remaining samples were not analysed as they were known to have chronic renal failure, had a normal calcium, or normal calcium and vitamin D. Given each PTH request costs $26 and there are 22,000 samples analysed yearly, reviewing PTH requests could potentially save $450,000 per year.

Conclusion: These events highlight the relevance of ongoing assay quality control as well as the need for appropriate requesting of tests.